It seldom happens that we feel special while testing a new app. Most programs are neat and offer some benefit but fade into oblivion all too soon. This even applies to Google that frequently put out apps that will be all forgotten about the following day. Google Lens, which has now been available on Android and iOS for a few days, might be the exception and soon become a part of many people's daily lives. Reason enough to give the app a go!

Google Lens(GL) is part of Google Assistant and was initially only available on their own cellphones. Now, the feature has been made available as a separate app (Android 5 and highter) and built into Google Photos (iOS). Here's how it works: GL has full camera access and detects objects either in single shots or camera live recordings through image and text recognition. When you spot something that might be of interest, you simply tap the object in question and GL will present you with additional information retrieved through Google Search. What may sound boring at first actually makes sense. Here's an example: as I am taking a shot of a book, I'm not only shown the title but also information about reviews, related movies and, naturally, stores that carry the item. I even get the option to access the associated audiobook through Spotify. GL also interfaces with other installed apps (magazine readers, YouTube etc.) and augments search results accordingly. In another test, GL recognized the Eiffel Tower and instantly showed me opening hours and admission fees. Not bad!

I also appreciate that Google Lense has an artistic sense offering useful information for paintings and sculptures. Bar codes are also supported, instantly obviating the need for an entire range of apps. But nothing beats a field test which is why I took the app on a tour through my house. I checked out our clothes first! Amidst silent protest from my better half, I rummaged through her wardrobe and took photos of ten pieces of ther clothes. It soon became apparent that big brands are quickly recognized including the option to reorder them or buy similar items. Business cards is where things got really interesting. GL instantly recognized them and offered to add them as contacts to my address book. Makes perfect sense! When you look at flowers, the app obviously turns into a real nature lover. Out of the eight plants in my home, five were recognized and the app even managed to distinguish between various plants of the genus hydrangea. GL appears to also know a lot about dogs, only mongrels (like my neighbors' dog) threw it off a little bit. At least it understood the creature was a dog. Thankfully, it knew nothing about the dog's proclivity for ear-shattering barking and calf biting.

Then, as I took a photo of a co-worker, the app just remarked "I'm sorry. I can't help you with that." That's exactly how I feel when I see him! But back to the topic... The app isn't perfect by any stretch of the imagination yet! Not only does it refuse to work on some cellphones but many objects are incorrectly recognized, if at all, and it takes some luck to hit the one spot that reveals the most meaningful information. Often, the results are just weird. A random shot from my balcony supposedly depicts a run-down restaurant in Mumbai, India. I'd better not tell the neighbors! Likewise, the angle at which shots are taken and object dimensions play an important role. For instance, GL struggles with bottle labels because the surface is cylinder-shaped. There's definitely room for improvement there. In other cases, the information presented is just useless. When I take photos of toys, I expect a little more than just the information that I'm probably looking at toys. Maybe the toy in question is missing from Google's database, as are so many old books, apparently.

GL still has a long way to go to become the super app Google would like it to be. At present, it can't handle road signs with foreign characters (I had expected more) and the app frequently seems to rely on guesswork with frustrating results. Text recognition and translation are also quite flaky with entire passages often remaining untranslated. The video commercial for the app painted a more rosy picture. As much as I find "it shall be" a thought-provoking description while looking at a garden chair through GL, poetry is neither the app's strong suit nor should it be. The app is also puzzled by handwriting which is a real shame. Also, some product categories apparently haven't been added yet. It works fine with fashion items and car parts but can't really make heads or tails of radios, headphones or Blu-ray players yet, simply calling them "audio". But just like with Google Maps which had a few initial teething problems, I expect great things from this app in the future! It would be a perfect fit for the visually impaired or the many users who struggle with their cellphones. 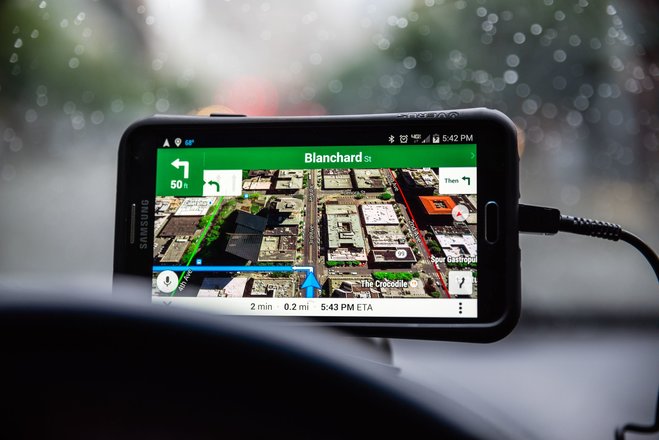 A pain in the past, a boon in the present: Google Maps

"Which permissions does the app require?" I hear you ask. We're talking about Google! Seriously, the app needs wide-ranging permissions which, to me, makes perfect sense in this particular situation. To use GL like an assistant, access to the camera, Internet and phone contacts are a given. Why the app needs voice and audio access is less obvious to me, though. Maybe, we'll see these capabilities utilized in future app updates. As always, it's up to you to decide whether you want to use GL. And, as always, skeptics are already suspecting another attempt by Google to learn all our secrets while supporters praise the enormous positive impact the app may have on our lives, calling it a true revolution in the cellphone business. I for one take a more sober stance, as always, but I do believe the app will be used by millions and marks the beginning of a new breed of applications!

What I would like to know: do you have use for Google Lens or do you fear feeding the data kraken even more of your personal data?