The end of video rental stores

What was your summer like? Mine was as changeable as the weather! First, I gained some wonderful memories during my vacation in Ireland (What an island!). Then, I lost a gall bladder in the hospital. That was less wonderful. And when you waste away on a sofa, slightly battered and at loose ends, you start to read even more. Thus, a headline caught my eye that I would have likely missed under normal circumstances: My old video rental store, to which I was once a loyal and regular customer, was about to close forever—the last of its kind in my area. Time for a swansong to a dear old friend! 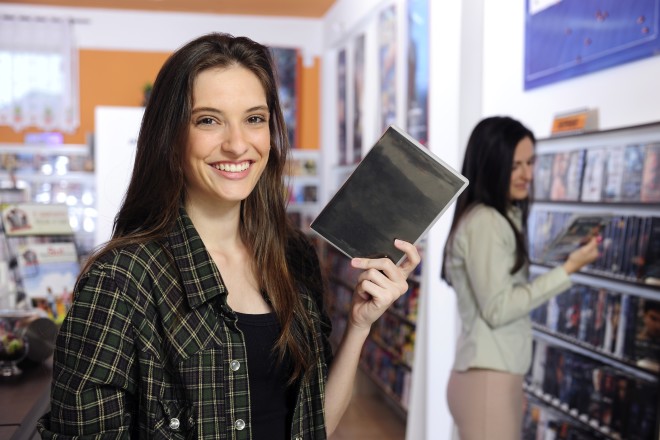 The day I got my first VCR, I was overjoyed! Equipped with four video heads, it was THE status symbol, and pride and joy, of any child's room back in the day—along with the computer, naturally. I record, therefore I am! Status considerations quickly took a backseat, as I could finally record anything and everything that was on TV, while being either asleep or away. But first, I had to slog through the manual. My VCR was built by Mitsubishi—and as easy to program as an interstellar spaceship. After a few attempts, I was left with a delightful blend of unwanted test images, gardening instructions and newscasts. Things started to improve when ShowView (VCR Plus+, G-Code, VideoPlus+) was introduced. From there on, all I had to do was type in a short code to record a program. It was a lifesaver.

After a tough struggle, I nonetheless began to master the device—only to realize how limited TV was back then. Yes, we had cable but current movies were still nowhere to be found. Those were mostly playing elsewhere, which is why video rental stores became a place of great longing. The latest Hollywood blockbusters, rare classics or ostracized genres like action and horror flicks, rentals saved many evenings—provided the goods were available. Even my grandma appreciated the classics from the "good old times". During my university years, video rental even became a source of income for me. A store in an infamous area around a railway station was looking for staff to man the counter during the night, so I worked the night shift for quite a while. There wasn't a single robbing—a miracle for which I have no explanation to this day. Maybe, I just looked too pathetic.

The advent of the internet saw the gathering of the first gray clouds. Although the venerable 14.4 kbit/s modems available at the time were anything but ideal to download movies (unless you were willing to spend weeks), images and animations were within reach, and quickly drove home an uncomfortable truth: Anything digital can be copied. And the more popular the material, the more quickly it will spread on the internet. As lines got faster, the age of internet piracy began. For the first time, rental and sales figures slumped, accompanied by the silent hope that law enforcement agencies would quickly put and end to this scourge. Said agencies quickly learned that the decentralized and somewhat anonymous nature of the internet didn't help matters. Filesharing applications, Usenet and file hosting services provided plenty of options to download much sought-after movies, turning privacy into a viable, para-professional, business.

The video industry's response was dumber than even skeptics had predicted. Bizarre copy protection methods, easy pickings for crackers but a maddening nuisance for ordinary users, were introduced to take the fight out of video pirates. The fact that most movies were duplicated at the pressing plant or even before and then leaked to the internet was completely ignored. Many DVD players or computer disc drives were suddenly unable to read the new discs, driving users to piracy even more. Some movies were only rented out reluctantly and with a warning that they may not play in most devices because of their copy protection. Others became available in stores long after they played in theaters and had already been forgotten by the masses. But the ubiquitous file sharing sites usually had all the latest flicks, giving new meaning to the term home cinema.

There was another advantage to file sharing: With downloads, viewers no longer had to leave their cozy sofas to get their movies. In contrast, those unlucky souls who had to wade through rain after work to get their videos (only to repeat the process two days later to return them) worked hard for their entertainment. But it wasn't file sharing alone that would spell the end for video stores. As DSL connections got faster, a legal alternative began to emerge: streaming. While more expensive and devoid of qualified staff or useful recommendations, streaming still offered a way to watch movies instantly and without leaving one's living room. For a monthly fee, users still didn't get every movie they wanted but gained access to a sizable, and commercial-free, collection. Today, self-produced series are becoming premium products, thanks to the likes of Netflix, HBO and Amazon Prime, as they offer a means of weaving ever more intricate plot lines and hooking viewers for hours on end.

And thus, video rental stores have become no more than an afterthought, a dying breed. Places that were once filled with dads cheered on by their families upon presenting the latest and greatest flicks are now falling into desolation. Expert advice given on a one-to-one basis, a matter of honor at my store, is now dished out by powerful algorithms. Weekend bargains, usually sold out within minutes, have turned into shelf-warmers. Personnel cutbacks are commonplace. In rural areas, a few stores are managing to keep the flag flying thanks to a lack of fast internet connectivity, while the last surviving city-based stores are putting all their hopes into extra-cheap bargains, porn flicks and large sales sections. This weekend will be the last time I walk through the double doors and browse through the neatly and thematically arranged sections. Maybe, I'll find a nice Blu-ray, make my way to the counter and close a very personal chapter in the entertainment industry for good.

What I would like to know: When was the last time you set foot in a video rental store? Do you have any memories worth sharing?