For as long as I can remember, virtual reality (VR) has been a dream of many creative minds, and movies like "Avatar" have given this idea mainstream appeal. I, on the other hand, find myself standing very visibly in one of Ashampoo's kitchenette, wearing glasses and frantically waving controllers around. Wandering virtual worlds invisible to outsiders always exposes yourself to a little bit of ridicule. Still, the physical effort pays, as the Oculus Quest, that I'm putting through its paces for you today, is a fairly intriguing piece of entertainment technology. No longer do you need a beefy PC and spread sensors around your room to experience VR. Grab a pair of glasses, a controller and off you go! 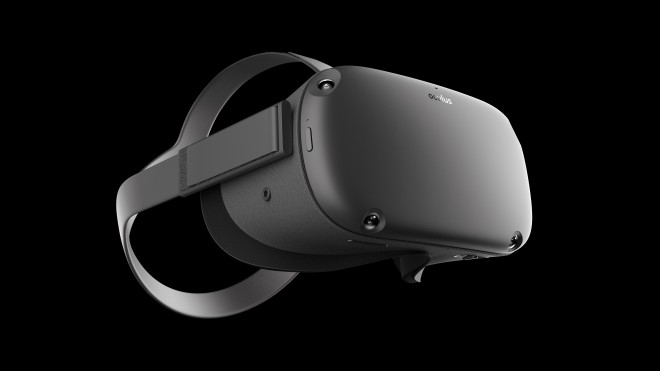 The unboxing was rather unspectacular. The glasses themselves clock in at around 500 grams, making the two controllers almost look flimsy in comparison. You get a charging cable, a rubbery head strap and a "facial interface", a spacer that is especially useful if you already wear glasses. The build quality is solid. Four tiny cameras are attached to the front, the purpose of which initially eludes me. Once I power up the device, I'm presented with a monochromatic view of my environment. Next, I set up WLAN to allow the device to stay connected to the internet and update its software. Afterwards, I'm prompted to set up my "Guardian", a program that warns me when I'm nearing objects in the real world. I use the controllers to point out the virtual barriers in my play space. It's better to encounter virtual barriers than real barriers, e.g. in the form of a wall or breakable furniture item, I suppose! Once set up, my designated play zone is surrounded by a clearly visible grid.

The four cameras apparently help with positional tracking, both for me and the device, that has to constantly calculate my position relative to the play zone to avoid unpleasant collisions. Once I step into the zone, the real fun begins. The dim black and white of the kitchenette quickly gives way to a fanciful, spacious room with a fireplace, large windows and a bookshelf. It's kind of like a (very cozy) Desktop, if you will. The wow effect lasts for a couple of minutes. Though the visuals aren't perfect, they're fairly realistic, and the environment is fully explorable in 360°. The per eye resolution is 1600 x 1440 pixels which makes for sharp images, albeit with a slightly noticeable screendoor pattern. Enter the controllers. They allow me to open menus, navigate, select and scroll. Being endowed with only gross motor skills, it takes me a few minutes to acclimatize. But after that, I hit the right buttons most of the time and am now ready to dive into VR.

Oculus Quest features a Snapdragon 835 CPU with an Adreno 540 GPU, enough to power most applications. The system boots quickly and games don't take long to start. Sure, these specs are no match for a modern PC, but that's not the point of this device—and would surely be asking too much for €450 (with 64 GB of storage). As a result, visuals tend to be simplified, with many games adopting a cartoonish appearance to prevent lag. One caveat: It's important to precisely position the glasses on your face to avoid blurriness. Those of us with smaller heads (and shorter noses!) may have trouble keeping the glasses in place, especially during movement. It is possible to adjust the lens spacing to accommodate for pupillary distance but the same doesn't apply to sharpness. There is a spacer available but it is said to be unsuitable for lively action.

Currently, games are undoubtedly the focus of the headset. And, admittedly, it's a blast to cast virtual fishing lines, tumble around inside space stations or duke it out in a boxing ring. The experience is incredibly immersive, even when some games require learning new control schemes. So I break a sweat after a few rounds of boxing, enthusiastically reel in some big catches and steadily perfect my skills with the lightsaber. I'm having so much fun. Bear in mind, I say that as a veteran PC gamer. The controls can be fiddly at times, reeling in fish or getting that hook in can get tricky, but controllers are not hands and some movements will invariably be counterintuitive. Also, it is recommended to use VR headsets in areas with lots of open space, preferably at least 3 x 3 meters wide, to get the full experience. As for the audio, the head strap features built-in headphones that get the job done and nothing more. If you expect crystal-clear Dolby 7.1 surround sound, you'll be disappointed.

Movies recorded with 360° cameras are a sight to behold on the Oculus. Flying through space, driving along the Californian coastline or watching live gigs are breathtaking experiences. Netflix have already put out an app to give viewers access to their comprehensive video library but I'd advise against hour-long sessions. For one thing, you'll eventually feel the weight of the device in your neck, and then your senses can only be fooled for so long. After all, your visual system senses motion but your vestibular system does not. This can cause symptoms similar to motion sickness and minor visual impairment. Besides, there seems to be little long-term motivation once the initial wow effect has worn off and the visual shortcomings become all too apparent. At present, VR titles just can't compete with PC games or Blu-ray movies, both in terms of visual quality and content. Furthermore, there are some growing pains concerning navigation, user profile management and some other features. For instance, once linked, I'm unable to remove my Facebook account without resetting the device to factory settings. That's a first!

You see, the Oculus Quest is fun but it´s got a ways to go. At present, there are too many teething problems to warrant a recommendation to buy the product. We're at the beginning of a development that will eventually find its way into everyday activities. VR headsets are not just a gimmick, the technology has huge potential. It's perfect to create immersive learning experiences, e.g. to transport kids back in time to witness historic events, instead of staring at flat screens or pages in a book. Games like "Assassins Creed Origins" already feature a realistic discovery tour mode to learn about ancient civilizations. And what about training simulations for future surgeons? Less mobile senior citizens could also benefit from the technology and take a walk on the beach or revisit their birth places once more—now there's an opportunity to fulfill some heartfelt wishes if I ever saw one. In the spirit of the present times, we could all learn more about the world and travel to distant locations without increasing our ecological footprints! So let's wait and see what future product generations have in store for us. Don't want to wait? Try out the device today, it's fun.

As always, this article is not meant as a product ad and I neither receive money from the manufacturer nor the device for my work. What a shame!

What I would like to know: Can you picture yourself wearing VR glasses or do you consider them a passing craze?