A review of Google Nest Mini: Is the smallest Nest worth it?

I'm generally not a fan of "smart speakers" like Amazon's Echo Dot, Apple's HomePod or Google's Nest Mini. I like the technology but I didn't own any of them for the longest time. I won't froth at the mouth about the alleged spying nature of these devices but I will say I dislike voice-based interfaces. I'd rather talk to people than machines, and type my commands into the latter when they require input. Recently though, I switched electricity providers and got two Google Nest Minis in my mailbox as a reward (they usually sell for about €50 a piece). Google is one the three major players in the market for virtual assistants, yet I never had the chance to review their Mini–until now. Let's get started! 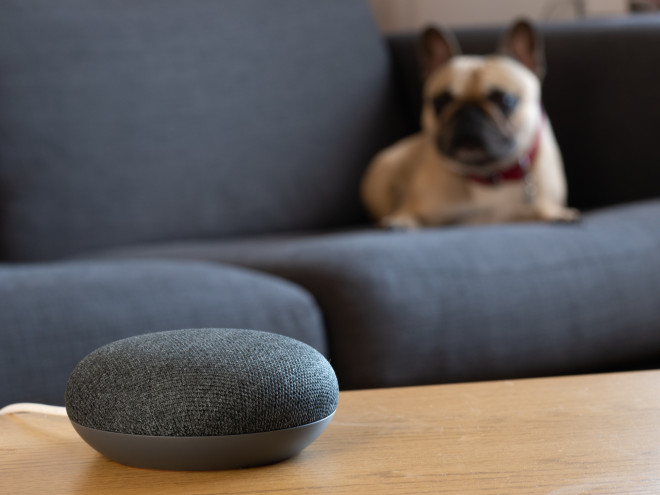 You know what to do with a gift horse and so do I: subject it to visual scrutiny! The devices are certainly minimalistically designed as to not waste a single dime. The power cable measures 1,5 meters, which should be enough, but there are no ports of any kind. Battery operation is not supported, it seems. Apart from that, there's a single switch to toggle the microphone and that's it. The speaker also houses tiny LEDs, the purpose if which I will soon discover. Touching the device, I quickly learn that Nest Mini comes with a couple of touch-based sensors that allow me to alter its volume or toggle between pause and active state through light tapping–with the aforementioned LEDs signalling its current state. Visually, the device is utterly inconspicuous and somewhat resembles an inflated hockey puck, no innovation award potential here. Likewise, the product doesn't come in a dazzling array of colors and actively tries to stay under the radar–but I could hang it on my wall, if I wanted to. Hardware-wise, there's a small 64-bit quad-core ARM CPU running at 1.4 GHz, three (far-field) microphones and a 40 mm driver for sound.

The sound is passable, even appealing for such a small form factor. It's not hi-fi quality though and far from a sonic miracle, as occasionally advertised by Google. Realistically speaking (and listening), basses are noticeably present, highs undistorted and complex pieces are rendered adequately. This is no Marantz or Denon killer after all but a small speaker meant to serve as an alarm clock, provide the music for your morning routine and tell you the latest news while you're brushing your teeth. Important: Each speaker can only provide mono sound on its own but you can pair (and configure) them for stereo. Even then, there's no risk of alienating your neighbors, as they barely reached 70 dB at maximum volume during my tests. For now, one goes in my kitchen and the other in my bathroom. Time to set them up! 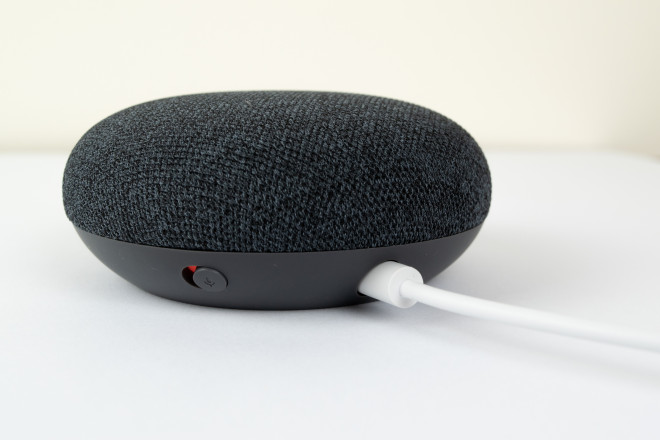 As you'd expect, everything is controlled via an app, i.e. Google Home. It can not only control my speakers but also my lights, Chromecasts, security cameras and thermostats, provided they are "smart" and compatible. For now, I'll just go with the speakers. Adding them to my WiFi network is quick and, as I browse through the app, I am beginning to get a feel for how powerful it really is: I could easily set up multiple devices in multiple rooms, even invite other family members, connect to various streaming services or podcasts and set up individual stock news. If you went for a larger screen-equipped model ("Google Hub"), you could even watch Netflix and other streaming services on the device. As far as listening is concerned, the Mini already covers everything from news, podcasts and radio to my personal playlist. With the right settings, it even supports phone calls–which I won't do in either my bathroom or my kitchen so I'll skip this part for this brief review.

Time to play some music! It's different tastes for different people, which is why each of us has their own Spotify profile at home. Switching profiles is a smooth experience, thanks to "Voice Match". Once set up by reading a couple of example sentences and allowing the device to analyze individual voice patterns, Google Nest Mini auto-selects matching user profiles during voice commands and provides tailored responses, e.g. for news. To try this out, I subscribed to an IT-heavy news service with a somewhat robotic sounding female anchor. If your main goal is to use Nest Mini as a wireless speaker, you can use Bluetooth to pair it with your cellphone. There's no old-school jack plug, sadly.

The Mini was designed to act as a voice-controlled assistant, so the time has come for a chat. Being Google-powered, accuracy is good but there are some amusing glitches: The speakers don't detect whether I am in a different room or just talking softly, but nonetheless don't want to miss their "cue". Consequently, they sometimes start blabbing while I'm in a call in another room. While I was discussing an upcoming family gathering, I could hear one of them reel off a Wikipedia entry about Nova Scotia–for whatever reason! And there's another aspect to voice recognition: Google expects me to speak in my native tongue, i.e. German, and struggles with loanwords or foreign terms I (try to) pronounce in their respective languages. For example, I learned that, for higher success rates, it's better to talk like German villains in Hollywood movies when I'm pronouncing English band names. It makes me feel like a super villain with a cat on my lap but it works, so what the heck. It also pays to keep commands short and to avoid lengthy pauses. 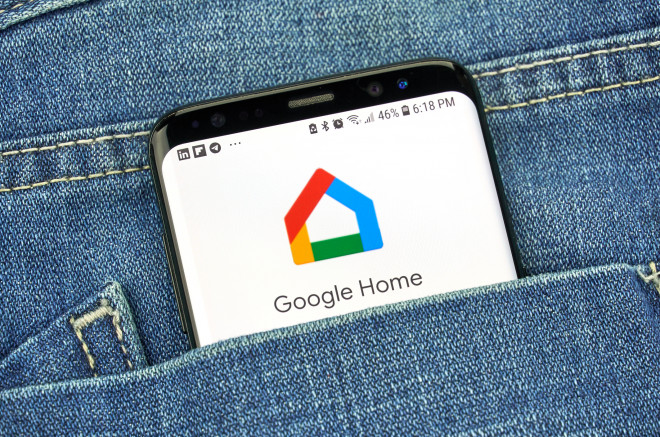 Do you get fair value for your money? Absolutely! Google Nest Mini is reliable and perfect for use as a modern kitchen or bathroom radio. The Home app is well-designed, beginner-friendly and there's a ton of tutorials and videos available online. And you can get Minis for as little as €30 on eBay and similar sites, making them somewhat of a bargain. I'm now controlling mine mostly through my cellphone with microphones disabled, not because I don't want Google to hear me singing in the shower (they don't know what they're missing!) but because I don't want another near heart-attack when they suddenly start blabbing unpromptedly, as they have now done multiple times. In addition, voice inputs can be a bit of a hassle, especially with long or non-trivial queries, e.g. when I'm trying to guess a specific song. In these instances, it's more comfortable for me to use my cellphone. All in all, there's no harm in trying and you get decent bang for your buck, especially if you're no friend of touch-based interfaces–or find it hard to use the often tiny buttons like so many senior citizens do. In theses cases, voice-based devices are a genuine help. For the rest of us, it's just another wireless speaker to stream our music, or the news, while relying on our trusty (on-screen) keyboards for everything else.

What I would like to know: Would you consider getting a smart speaker or do you already own one?